From August 25th 2017 through August 29, 2017, Hurricane Harvey wreaked havoc on Southeast Texas. The coastal areas from Corpus Christi to Beaumont/Port Arthur all suffered damage due to high winds, flooding, or both. The community of Rockport, northeast of Corpus Christi, took the brunt of wind damage. The meandering remnants of the storm dropped historic amounts of rain on communities from Houston to Southern Louisiana. Consequently, tens of thousands of private homes were destroyed or severely damaged by flood and estimates ranging from 30,000-70,000 multifamily units were left uninhabitable by storm or flood damage.

In the following images, census tracts with damage (left) and major damage (right) are shown outlined in red, with yellow markers denoting ALN Apartment Data properties on each. Click on an image to open a new tab with an interactive version of these maps. 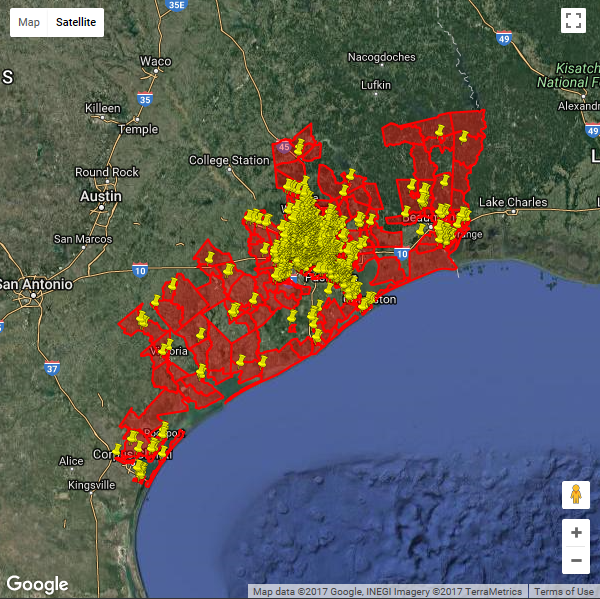 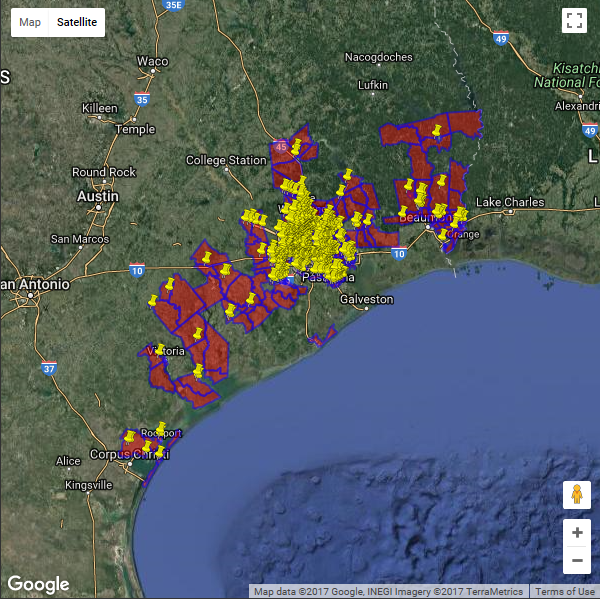 Harvey primarily affected four of the markets that we track: Corpus Christi, Victoria, Houston and Beaumont-Port Arthur. Here’s a look at those markets pre- and post- Harvey.

The greater Victoria market had about 7200 units in August 2017. Of those units, 556 were in census tracts designated with major damage to dwellings. Prior to the storm occupancy as at 92% so there were about 580 vacant units at the time of the storm. Depending on the severity of the damaged areas, multifamily housing may be scarce in the area.

In August, Houston had about 660,000 multifamily units and another 5,000 or so under construction and not yet leasing. About half of the units under construction were slated to come online before the end of the year. Of the 856 census tracts in the greater Houston market, 357 experienced at least minor damage to dwellings. 258 census tracts had dwellings that experienced major damage or were destroyed. If we look at the 205,000 units located in the census tracts reporting major damage, about 180,000 were conventional property units, 7600 units were designated senior living, and just over 21,000 were affordable or tax credit housing.

We have already identified more than 6,000 units that have been rendered uninhabitable. That number is sure to rise as more assessments are made public. There are approximately 7200 ground level units in the census tracts that reported destroyed dwellings, so that would probably be a conservative estimate of damaged units.

Of the census tracts that experienced major damage there were approximately 75,000 ground floor units. Based on our surveys within these census tracts, approximately 58% of the properties reported no damage or minor damage. Consequently, if all the ground floor units from the other 42% of properties were destroyed, the upper limit for uninhabitable units would be about 31,000.

Prior to Harvey, Houston had an average occupancy rate of 88.9%, thus it had almost 74,000 vacant units. The loss of 5% of the units in a market is bound to significantly drive up occupancy rates, and combined with another 20,000 homeowners needing housing, Houston will get a sizeable bump in occupancy. There were only 61,400 3-bedroom units in the Houston area in August. The lack of available and affordable 3 bedroom units may push renters out of the area. For the most part, the Houston market should be able to absorb the displaced tenants and homeowners of Harvey.

Beaumont and Port Arthur together had about 24,000 multifamily units within 25 census tracts. The average occupancy was 91.8% prior to Harvey. Sixteen of the 25 census tracts experienced major damage or destroyed dwellings. About 3600 units were in the sixteen census tracts in total, and about 1800 of those units were on the ground floor. Of those units, only 2600 were conventional. Almost 1000 of the units were affordable or tax credit, and 156 were designated as senior living. Depending on the extent of the damage to private homes and the multifamily units in those census tracts, the Beaumont-Port Arthur area may have trouble placing the displaced households within the same market.

In the immediate aftermath of Hurricane Harvey, ALN temporarily refrained from contacting nearly 3300 properties in affected areas, after which we began a soft contact campaign to learn more about the total impact. Our normal methodology has since resumed, and we are now providing storm related notes on a property-by-property basis to our clients who subscribe to those markets.

As of September 1st, ALN’s monthly Market Reviews have a completely new format.

For occupancy, rents, storm related notes and more, we invite you to review our services or contact us so we can help create an effective solution for your business. Don’t forget to share this article with the buttons below!